The Nonprofit Helpers Who Helped Themselves 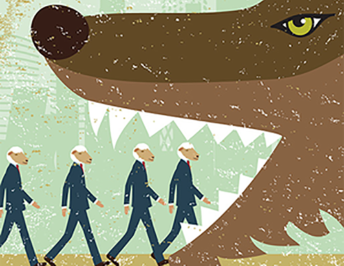 29 Aug The Nonprofit Helpers Who Helped Themselves

Greed is everywhere. It pollutes all industries and organizations, including those dedicated to helping the poorest and most vulnerable of our society. And it breeds fraudsters within these organizations who have profound canniness and precisely zero moral queasiness when selecting their victims. Fraudsters like Emma and Kate.

Emma Kollegian and Kate Lashua never knew each other, although my office knew both of them in painful detail. But the similarities of their profiles, the sub-basement venality of their embezzlements and the predations of their victims make them an identical sub-type of embezzler that society should be educated to recognize. My unscientific theory is that when I see two embezzlers with similar characteristics and schemes, scores more are out there, including those who wear the professional halos of social-service employees.

For 22 years, Emma worked at a nonprofit corporation called LifeAid Inc. that provides services to people with severe mental illnesses and/or chemical dependency problems. These services include housing subsidies and case management for long-term, chronically homeless clients. LifeAid receives public funds for its work and has several employees.

During her first 19 years at LifeAid, Emma worked as a case manager for individual clients who were deeply troubled and in great need. Emma eventually was promoted to program coordinator for LifeAid’s Homeless Project; she retained her caseload of clients, while also taking on new responsibilities. The promotion also gave Emma the authority to issue checks from the Homeless Project’s sub-account within LifeAid.

Shortly after she was promoted to program coordinator, Emma embezzled more than $96,000 using two separate schemes. In scheme No. 1, she issued 128 checks to herself from the Homeless Project account, purportedly for reimbursements, often using the signature stamp of the LifeAid manager actually authorized to sign or stamp checks. She supplied no meaningful documentation for these issuances, and many of the “reimbursements” were for purchases outside of LifeAid’s policies and procedures.

Emma gave her defenseless, trusting clients a number of pure-malarkey explanations for these checks. She told them the checks were issued to them by mistake; the checks should have been paid to their landlords; the checks were actually for their apartment expenses; the checks simply should have been payable to someone else; etc. Emma’s clients had so many life problems and so few resources or capabilities that often they performed odd jobs around LifeAid’s property (such as moving furniture or clearing litter from the exterior grounds) as their sole employment. Emma had been their case manager for years, so they trusted her, they needed her services and they did what she asked them to do.

Emma did not deploy these stolen funds to her trusting clients. She blew the money on personal living expenses — including mortgage payments on a primary residence and a lakefront cabin she co-owned with her wife — and on booze and gambling.

Early in Emma’s 22nd year of employment, and well into her embezzlement scheme, LifeAid’s comptroller noticed suspicious activity in bills and documentation. The comptroller also noticed two checks payable to clients — a highly unusual occurrence because all checks for client expenses were issued to vendors, not to the clients themselves. The comptroller immediately initiated an audit and forensic analysis by an outside accounting firm. Through a process of document review, bookkeeping records review, and, most painfully, in-person interviews with all of the clients named as payees, the audit uncovered the entire scope of Emma’s thefts. Many of the clients who were interviewed had significant memory problems but were still able to describe startlingly similar stories and to identify instances when someone else’s handwriting appeared under their signatures on endorsed checks.

LifeAid notified its insurance carrier and filed a police report. Police investigators interviewed Emma, who LifeAid had fired by then and was working as a vocational counselor with another social service agency. Emma denied keeping any money for herself; she admitted to taking clients to the bank but stated she cashed the checks and gave the cash to her clients or deposited the endorsed checks and gave cash she already had on her to the client. She told investigators she did this because many of her clients didn’t have bank accounts, and she wanted to help them avoid stiff check-cashing fees. She also told investigators that LifeAid had coached her clients and deliberately “lost” her supporting documentation, and that a member of the LifeAid staff was “evil.”

Her allegations notwithstanding, Emma was later charged with two counts of felony theft by swindle, and the disposition of this case is pending as of this writing.